Hello, friends. Still in the process… … of recovering data from my crashed old website and moving it over here. Hard to fit it in between other writing and studying and home ed and eating all the noodles… GETTING THERE.

Travel update in the works, and a few other things…

Remember that time when I rode around on the back of motorbikes with dubious brake systems in Vietnam? Good times. 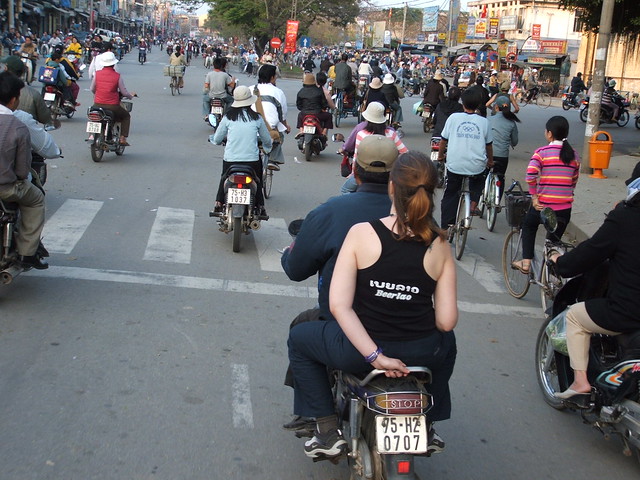 If you do remember, then you’ve been with me a long time. Kudos for sticking it out! I know, I know. Sorry not sorry for being a preachy-ass vegan high atop my elite fortress of moral superiority… To be fair, I was only a flaky-ass vegetarian when I was on the back of that bike. A few more months passed before I went vegan. I’d only just finished reading a first edition paperback copy of Animal Liberation by Peter Singer that I picked up in a second-hand bookshop in Laos a week or two before this photo was taken. Discovering utilitarianism was a start, I guess… almost. But I digress.

I’m on the cusp of another trip to south-east Asia. It’s part business trip, part mini-break, so you’re not going to see a great number of wacky Instagram photos of poolside cocktails or ridiculously large buckets of fruit or hiking adventures, but you will probably see some pics of delicious snacks and noodle dishes, museums and temples… and my kids doing kid stuff in foreign lands, which will be a new adventure – hopefully more fun than nightmarish for me… haha..?

So far Singapore, Vietnam, and Malaysia are on the itinerary. I’ll journal most of my travel at this blog instead of on paper this time… and instead of on my Livejournal of yester-decade… crikey, has it really been that long?

Stay tuned for some insightful cultural and political discourse and sexy food pics… Okay, probably mainly food pics, pretty scenery, and restaurant reviews. It all depends on how much sleep I get… and with kids in tow and a few timezone changes to contend with… well. We all know how that goes. I hope the hotel rooms have coffee-making facilities. Pray for me… by which I mean, as a fairly nihilistic atheist, please release your futile wishes into the void and take a lovely nap on my behalf if you can. You might miss that napping ability some day… which reminds me: I have to put earplugs on my shopping list.

See you in Singapore!

The Jungle Book: a scathing review, because if not me, then who?

A visually stunning film with some great comedic dialogue in parts to break up the drama, such that many scenes were almost a joy to watch… almost. I wanted to give this movie a 4/5. I wanted to love it, as an animal fan and/or as a vegan. Living in the jungle! With animals! With magical interspecies peace and harmony! What’s not to love?

Rudyard Kipling, the author of the original story (but not really because he admitted plagiarism) was a jingoistic garbageman to some extent, at least according to Orwell according to Wikipedia… and since we find ourselves living in a world that incorporates more elements of an Orwellian dystopia than most of us are entirely comfortable with, I’m inclined to take heed of his Wikipedian words, at least a little bit. So, with very meh interpretations of Kipling aside…

Instead of awarding an impulsive 4/5 to the 2016 version of The Jungle Book because whee shiny, I have to toss a meagre 2/5 at it when I’m forced to take into consideration a few of the less-than-shiny-and-new elements.

A lack of gender diversity: only two significant female roles in the film – nay, in the entire the jungle! – how does that work? A few logistical problems there, surely… but such is the disturbing trend in Disney films towards fewer female voices… We find ourselves with a few lines from a noble, perfect mother wolf and a couple more from an evil seductress snake. Ahh, we meet again, Madonna-whore dichotomy.

The tiger. The evil, evil tiger with a grudge against man… but not women, they don’t exist. The evil, evil monstrous villain of the piece, who must be repeatedly punished for being a tiger, for daring to question the authority of man. A tiger who was burned and disfigured by man for being a tiger, how dare said tiger hold a grudge against the son of his attacker? Granted, the tiger tried to eat his father… but still, the traumatised tiger must be vanquished with violence in fire so man can rise above all other animals (and women, if there are any left besides wolf mom) in the jungle.

Man, not big cats, is King of the Beasts, top of the food chain (lol), because man has fire and uses tools. Tool use is a special human “trick” says the film… but it’s not because loads of other animals use tools. We all know that… or we ought to, but we want to feel special! This movie rehashes this tired old narrative, even though the recorded science showing tool creation and use in other animal species is over 50 years old… I wish I was special, so very special… says humanity, once again. Stupid is as stupid does… Evil tiger is as evil tiger does. Some fairly one-dimensional stuff… but this story is pretty big on false dichotomies.

The special human child with magic tool making powers throws away his stolen torch he’s burnt down half the jungle with… A torch that was his only defence against the evil tiger. Mowgli is repeatedly rewarded for being daft as all heck while other species around him suffer for his sins at the hands – paws! – of his foe… and his foe suffers, too, repeatedly. Human failings causing suffering to all the species around him… well, at least this retelling of The Jungle Book is realistic in one regard?

Anyhow… Perhaps I’ve gone too far, so make up your own mind. The Jungle Book: gorgeous, enjoyable CGI and some fun moments: 4/5… or terrible as hell if you dare to read between the lines: 2/5. I’m going to stand by the latter score: a beautiful film but the antiquated themes from Kipling are still all too visible, even after it has been cleaned up for the modern audience… All this and I haven’t even mentioned the colonialist/noble savage theme underpinning the classic tale yet… but I won’t go there because Disney did a half-decent job of writing most of that rubbish out of the story.

Is pretty CGI and a few LOLs enough to make an enjoyable film when there are obvious problematic elements? The Rotten Tomatoes aggregator is currently at 100% positive reviews. Am I too harsh or are standards slipping? Why not both! Is cultural literacy amongst critics at an all-time low or are negative reviews of pre-ordained blockbusters unwanted by publishers? Why not both again!

Not about alternative education this time. Still under construction. Please drop me a line if you find any glaring errors or omissions or silliness…

I’ve added a few pages to this website under the homeschool section. They are incomplete, but it’s a start…

Homeschool: what we do & don’t do
Resources we use
Vegan education
Our schedule
Home ed registration in Australia It must be. I don’t even know.

🚧 In the process of moving Veganza to this site that you’re looking at: Tahini Kill. 🚧